I have a number of religious and exvangelical friends who have expressed concern about the way that their church discusses mental illness*. Let’s take this recent tweet posted in August from Desiring God, a highly regarded ministry with international acclaim, as an example: 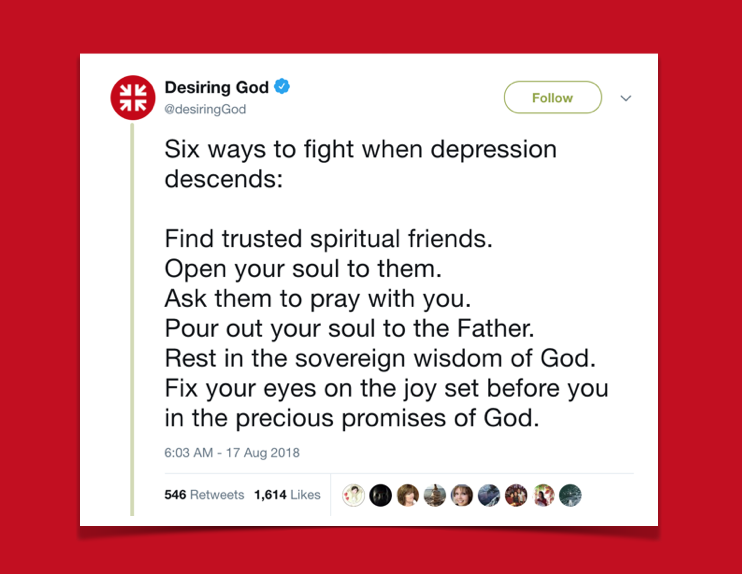 Firstly, this implies that people facing depression aren’t already faithful. Secondly, if these six “quick and easy” steps work in a matter of hours, it’s not depression, it’s a bad day. Thirdly and most importantly: ENCOURAGE PEOPLE FIGHTING DEPRESSION TO SEE A TRAINED PROFESSIONAL.

In an online study called Perceptions of Serious Mental Illness in the Local Church, 41.2% of participants had their diagnoses dismissed by the church. The study also found that “participants who were told that they did not have a mental illness were more likely to:
1) attend church more than once a week and to
2) describe their church as conservative, and/or
3) charismatic (“Spirit-filled”).”
The authors state that “future efforts to bring the mental health and faith communities together must focus more on the specific conservative and charismatic doctrinal issues that presently limit such collaborations.”

Here are five such issues, or messages, that fester in unhealthy churches and limit collaborations between mental health and faith communities:

1. Mental illness can be cured by prayer alone

If you have faith when you pray, you will be given whatever you ask for. -Matthew 21:22

If you believe in the power of prayer, I understand the conclusion that mental illness can therefore be cured by prayer. In fact, one American study found that 48% of self-identified born-again, evangelical or fundamentalist Christians believe that prayer alone can heal serious mental illness.

Simplifying such a message is incredibly harmful.

Also, prayer is the best cure for mental illness. #ChristianAltFacts

Prayer is not a substitute, it should never be seen as a substitute. When someone is incredibly ill, we rush them to hospital. We don’t leave them on the floor convulsing as we pull out a Bible and say a little prayer.

When it comes to matters of life and death, of health and illness, it is not a denial of God’s power to call on science. People don’t need prayer to be “cured” from mental illness. Plenty of believers (and non-believers who aren’t prayed for) are helped by the science of psychology all the time. Dare I say it, the success rate is a lot higher than prayer alone.

Also worth noting, not everyone can be “cured”. For many it’s more about healthy forms of management. That cannot happen with one prayer (unless it’s a miracle, but don’t hedge your bets), it happens with continuous counselling.

2. Your mental health issues are caused by unrepentant sin/demons

This is outrageous. I personally haven’t heard many experiences from those who have been told this, but I didn’t have to look far on Twitter and Google to find many who had. Take Samantha, a 27-year- old Progressive Christian from Maryland in the United States who submitted her thoughts to The Guardian in 2014.

“I’ve experienced depression, anxiety, PTSD. My latest church did not address it at all in over two years. Over the course of my life, from Baptist to fundamentalist to Presbyterian churches, I’ve been told that any mental health problems in my life are caused by a) incorrect theology or b) unrepentant sin.

Most have stated directly that they do not believe that mental illness exists, but that every supposed illness is a spiritual problem. Psychology and psychiatry were almost always distrusted as demonic, and reading my Bible more and obeying my pastor were the solution.”

Here are some #christianaltfacts Tweets relating to mental illness.

This goes for physical maladies as well. I can’t express my relief at 18, when I was told by a neurologist that my seizures were a medical condition, and not demon possession or hysteria. Treatment plans did not include prayer. #Exvangelical

there’s the #ChristianAltFacts that schizophrenia and other mental illnesses aren’t illnesses at all. it’s just possession by demons. yes, people suffering from mental illness just need an exorcism..

Some days, the anxiety surrounding seeing others, or the thought of “popcorn prayer”, or singing in front of people is so immense that you’re shaking, buckling under the weight of your own fears.

For some mental illnesses, schizophrenia and dissociative identity disorder for example, there can be genuine risks involved if you leave the house, risks that a room full of strangers may not understand.

Don’t guilt trip the mentally unwell with their infrequent church attendance. Try to understand their illness instead. Health is more of a salvation issue than church. The person has got to be alive to know the Jesus you believe in.

4. An untrained Women’s Minister is a substitute for a psychologist

The first port of call shouldn’t be an untrained Women’s Minister, especially if the person with a mental illness has not developed a trusting relationship with her. I know 30-year-old women’s ministers who went from Christian family to Christian school to Christian college to a Christian marriage to a Christian workplace. I’m sure God’s using those people well, He can use everyone after all, but when it comes to something as complex as mental illness, regardless of whether you’re in the bubble or not, your Women’s Minister is not enough.

7) Stop letting unqualified church leaders provide non-licensed counseling to people (especially minors). The Church should be supporting people, not controlling how they heal or process trauma (some of which they experience AT CHURCH).

5. You should pray that God will “give you the right words” when talking to someone with a mental illness

Praying that God will “give you the right words” means that whatever words ”He gives you” in that moment will be perfect, even if they’re not, because everything is pre-ordained and God-given

Unless you are a trained professional with experience, do not rely on your own words to heal someone of their mental trauma or pain. Use your words to direct them to someone who can, and shower them with encouragement and support along the way.

Churches need to talk more about mental illness. Yes, in the context of faith, but supported by science-based resources that won’t contextualise a person’s chemical imbalance in the framework of unrepentant sin and/or prescribe “relying on God” as appropriate medicine.

*I feel like I need to add a disclaimer, for all the people who rush to my email inbox each time I post something about “the church”. Yes, not all churches are like this. Some have psychologists. Some have really great mental health policies. Many of you have not seen any of these 5 things happen in your own church. But because they DO exist, and they exist under the banner of the faith you follow and the church body you represent, it should matter to you. 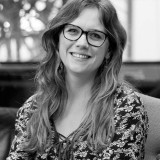 Ruby left the Sydney Anglican Church when she was 22 years old and she's been haphazardly trying to put the pieces back together again ever since. You can usually find her reading books, gawking over motorbikes, swimming in the ocean or buying chocolate milk at the servo barefoot. You can find her on Instagram at @rubyclaireee
Ruby Claire