Dear Parents, Here’s What Not To Do When Your Kids Leave The Church

She uses the voice that mothers use when they realise their child’s perspective about the world is conflicting, when their lifestyle is no longer aligned to the vision they had for them when they were growing in their swelling bellies. It’s a deep-seeded longing married with a sense of mourning. “What did I do wrong? What is God trying to teach me?”

In her loving pressure on Sunday mornings I can hear fear. I can hear loss. She is crumbling under the reality of her child’s rejection of religious faith. She is terrified that her baby girl may very well live out eternity in the fiery pits of hell. She tries, to no avail, to bring her back to church. She laments the conversations they shared about what she learnt at children’s church when she was small. She grieves for the loss of a joy her daughter may never know without Jesus.

Both her and her daughter think each other have got it wrong.

This is a common story. Sometimes it’s with eyebrow-raising fathers, or disinterested sons. Sometimes with disapproving older siblings or conservative grandparents. Sometimes anger and frustration weaves its way into dinner table conversations when everyone is talking about their plans for the weekend. Often it resorts to tears, or someone slamming down a fork and storming off to their bedroom. It’s just like any old family argument about dirty washing or dirty dishes except it’s about faith in something that is often difficult for both believers and non-believers to comprehend.

Many people have turned to me in recent months expressing the hardship they face at home when their faith no longer aligns to their parents.

Mothers and fathers, I want to share with you the many people who have suffered anxiety due to your questioning and disapproval of their lifestyle choices. Everything from no longer going to Bible study or a church service, to getting drunk on weekends and having premarital sex with a someone (who may not be a lover!). For some, Sundays are the worst day of the week and many have expressed their desire to move out of home earlier so they can live their ‘life of sin’ in peace.

I want to share a few words that were written in the extended response components of a survey I conducted recently about leaving religion.

“I do think it hurt him [my father] and still does because he believes that myself and my siblings… are likely going to hell. I feel guilty when I do things outside of the Christian framework, e.g. sex before marriage, dating a non-Christian partner – we’ve been dating for a year and I still haven’t told my parents!”

“… I was upset about disappointing my parents. Quickly their disappointment turned to anger, which made me angry too. We fought a lot.”

“…My Christian parents who would be so heartbroken if I was to walk away from church. If it wasn’t for them I would have left already. It’s hard because I don’t want to hurt them but at the same time need to live my life for what I believe.”

“I remember seeing a Christian study book on a shelf at home, I nonchalantly flipped through it and noticed it had been filled out. In the little box underneath the question “what is your greatest fear?” my mother had scrawled “my children dying, my children not becoming Christians”. I teared up while reading this, because I knew the impact my decision was going to have on my parents.”

I’m going to spend a quick moment talking about the presence of a non-religious partner, because this is something that a lot of parents are uncomfortable with and something a lot of young people find the most difficult to reconcile with their families:

“I know my family all discuss my life privately which makes me sick. My parents express how my life isn’t how they imagined it’d be, believe they own me & cannot accept that I have my own autonomy. They’d like to see my partner make a “real commitment” to me through marriage “before God” & believe our relationship isn’t as authentic as theirs. My boyfriend & I however are happily unmarried & might be forever. It sits right with us.”

I have spoken to Christian parents whose children no longer attend church, and they talk about the shame and embarrassment – not necessarily of their children, but from others (usually childless) in the church who wonder where they got it wrong, why their kids have ‘fallen away’ or ‘gone off the rails’. It’s probably because they didn’t bring the Christian faith into the home, some would say, they just constricted it to Sundays and shipped them off to youth group with little communication at dinner. I bet they didn’t pray together, or read the Bible together. The church doesn’t focus enough on bringing Jesus home.

I feel bad that parents have to feel this shame as well. I guess it’s similar to the shame that a child feels at home too.

I understand the ever-present fear of hell and Jesus’s imminent return. I get how overwhelming that is, I used to feel it for my loved ones who didn’t believe in the resurrection and forgiveness of Jesus Christ as well. Your children probably used to feel it too. We get that there’s a fire coming and the smoke is here and it’s an emergency and you want to haul us out lest we burn to death. But you need to know that we can’t see fire and we can’t feel heat anymore. We’re numb. We’re floating out in a big blue ocean and the concept of fire burning here is completely unfathomable.

So how do you tell someone a fire is coming when they’re in an ocean?

I think that if your child walks away from faith, there should be room for celebration. Not necessarily for the rejection of faith itself, but what lies beneath that rejection. You have raised a young man or young woman who feels bold enough to think about the world and their existence for themselves. They aren’t simply lapping up the Bible on a Sunday morning with no regard for its context in the world. You have raised an independent thinker who questions what they have been taught. This skill is integral in the workplace and in relationships as well. Someone who doesn’t question can often fall into the hands of harmful people.

My parents are Christians, but they read my blog and support my journey. Why? Because it’s my journey. Because I’m seeking. Because I have recognised I have only been taught one story and I want to know more stories so I know I’m making the right choice. But I think I (and a lot of us with Christian parents) can be a heck of a lot more understanding of our parents’ fear of fire. While religious belief isn’t as easy and consumable as it once was, our parents are not ‘dumb’ or ‘ignorant’ for consuming it. They have been on this earth so much longer than us and often they simply want us to experience the joy they have now found.

If you live with your parents and you haven’t had a conversation about this stuff I encourage you to. My parents extended me the freedom of discovering faith on my own accord, but the ability to talk to two Christians about my hesitations and doubts for a few hours in tears, to express the fears that I have shared in this blog has been immensely helpful. Any barriers that were there are well and truly torn down. And parents, if you aren’t ready to accept your child’s doubt, confusion and anger associated with being indoctrinated at a young age, you need to. Responding with Bible verses and prayer isn’t always the answer, because it’s situated in the context of the belief your child no longer upholds. Be a parent before you be a preacher.

Don’t be afraid to let go and simply accept the adult they are becoming. Rest knowing that if it’s ‘God’s plan for them to become a Christian’ God will make it happen with or without you.

And I think everyone, both those of us with Christian parents and parents with children who are leaving faith, can all be a little more understanding of each other. 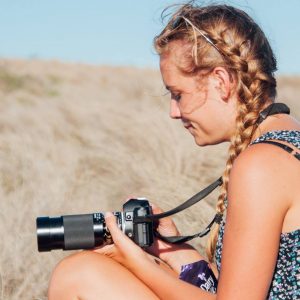 Ruby left the Sydney Anglican Church when she was 22 years old and she's been haphazardly trying to put the pieces back together again ever since. You can usually find her reading books, gawking over motorbikes, swimming in the ocean or buying chocolate milk at the servo barefoot.
Ruby Claire